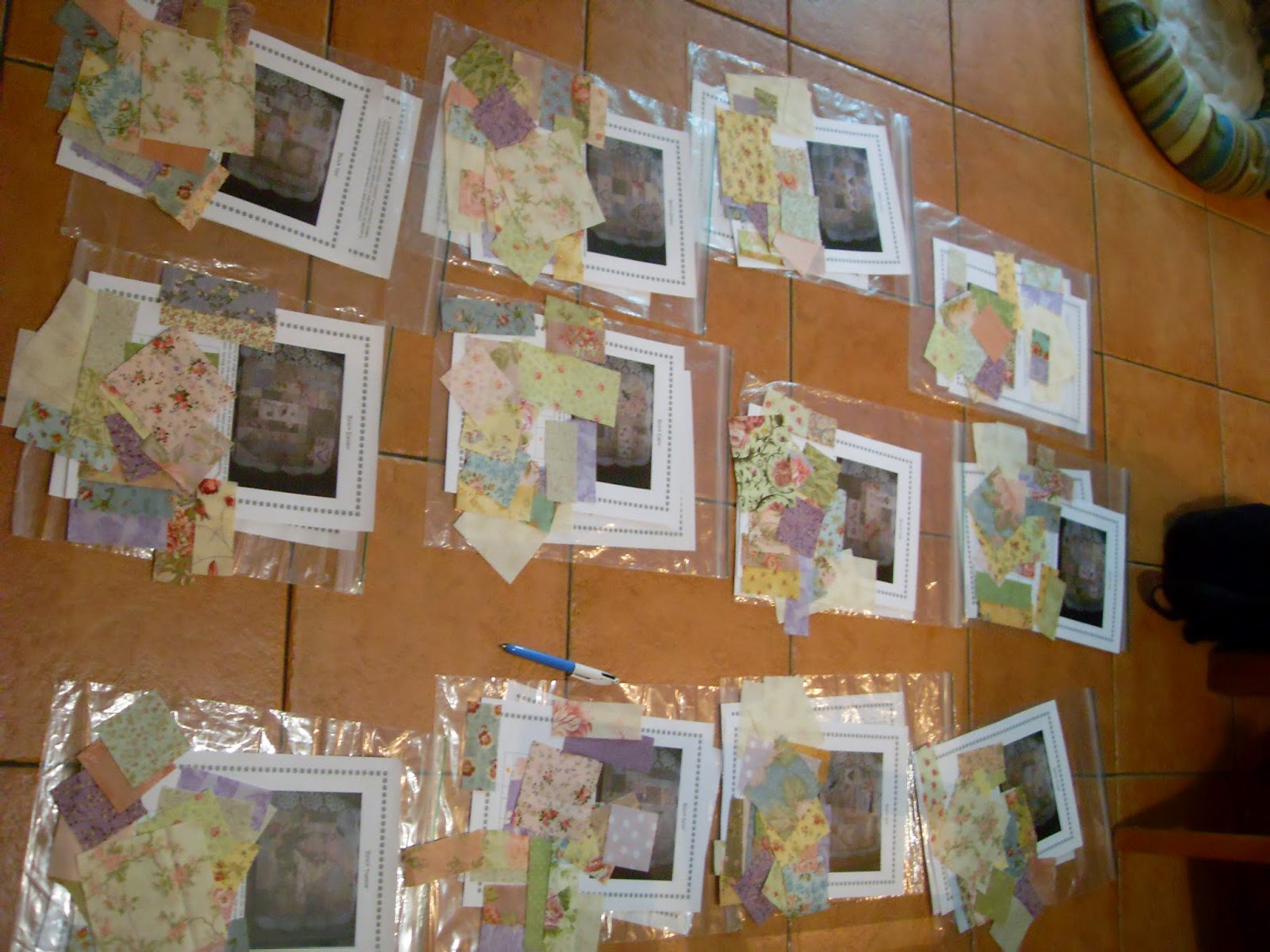 I bought a pattern last year at my guilds quilt show... or was it the year before?  Anyhoo, I sat down and went through the pattern on Friday, figuring out what I needed. 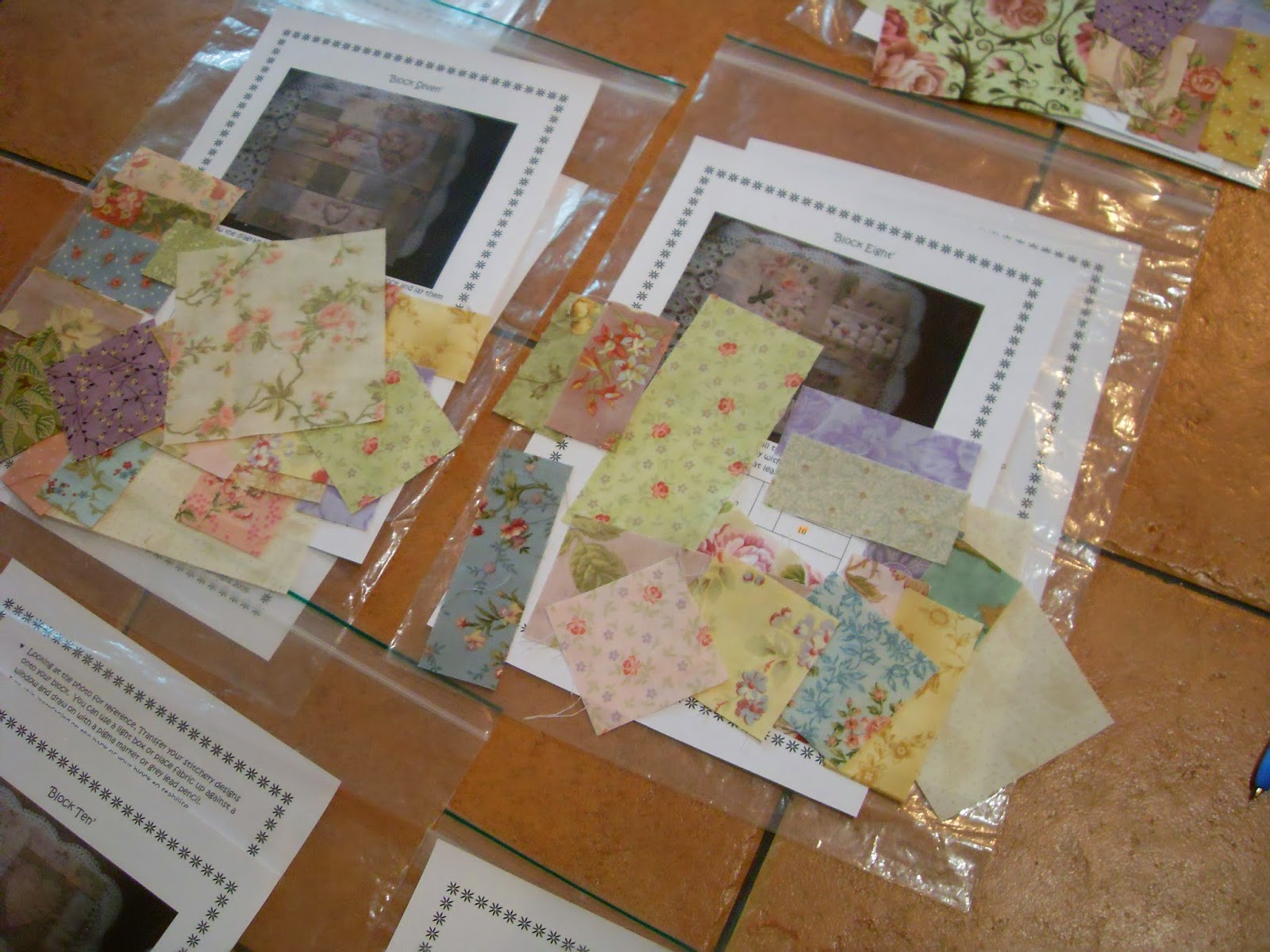 This morning I got up at 6am to ride before the heat kicked in and when I came home I stood for quite a few hours prepping all the blocks.  I had a lot of fabric already cut and sorted into bags to make it easy when I want stuff for projects. 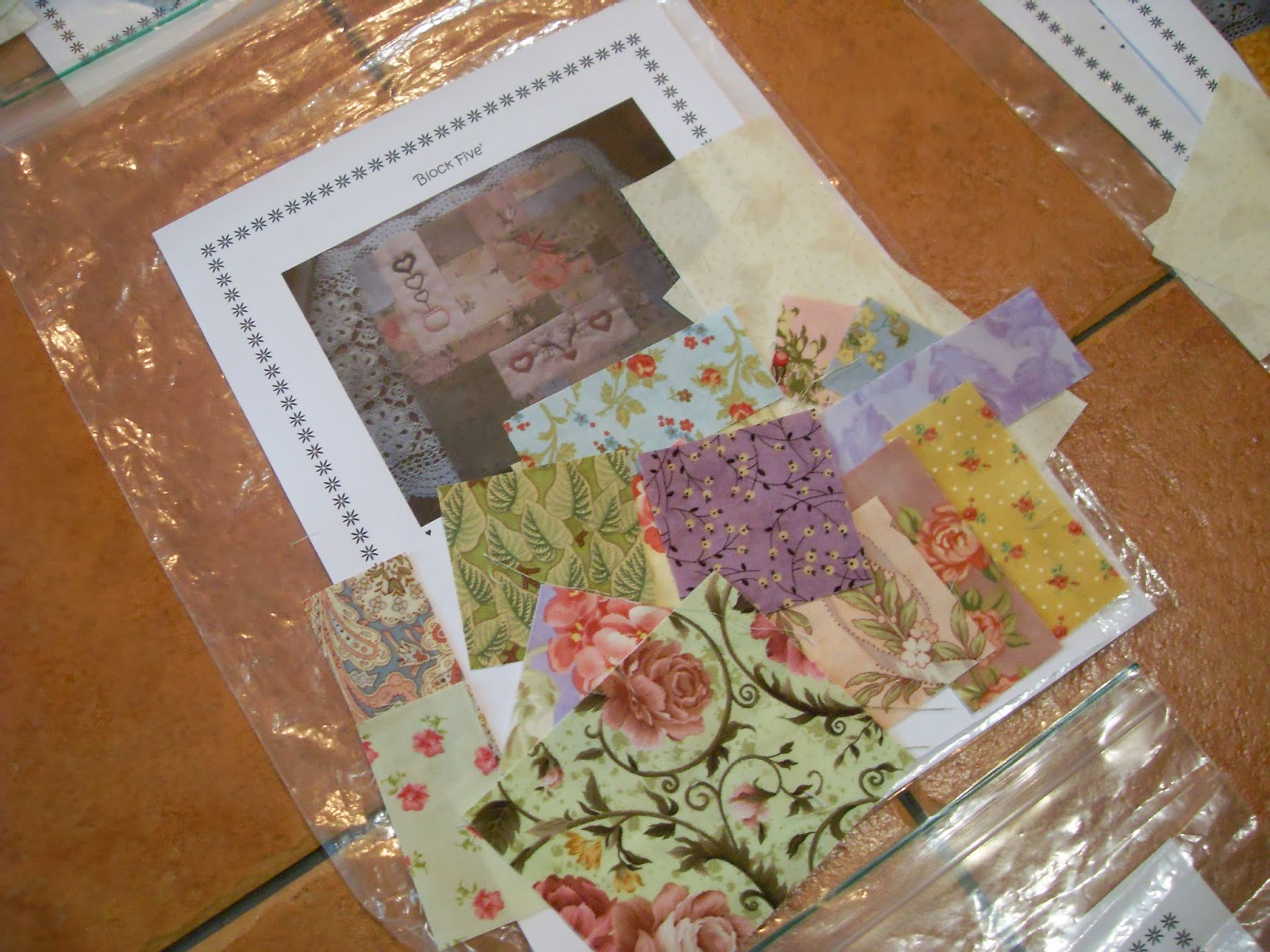 So most of it was cross cutting and making sure I didn't have the same fabrics in each bag.  So now I have 12 blocks ready to piece... well not quite, I will have to mark my seam allowance first. But that's something i do while I sit in front of the TV each evening.  Then I can grab a bag and go!

I will be hand piecing the blocks and then applique and embroider them.  Not sure who will receive this quilt but I shall enjoy making it... will be a long term project, I still have to keep on piecing my double wedding ring!
Posted by Libster at 9:46 PM 2 comments:

Labels: like i need another project on the go. feet are killing me, rotary cutters elbow. 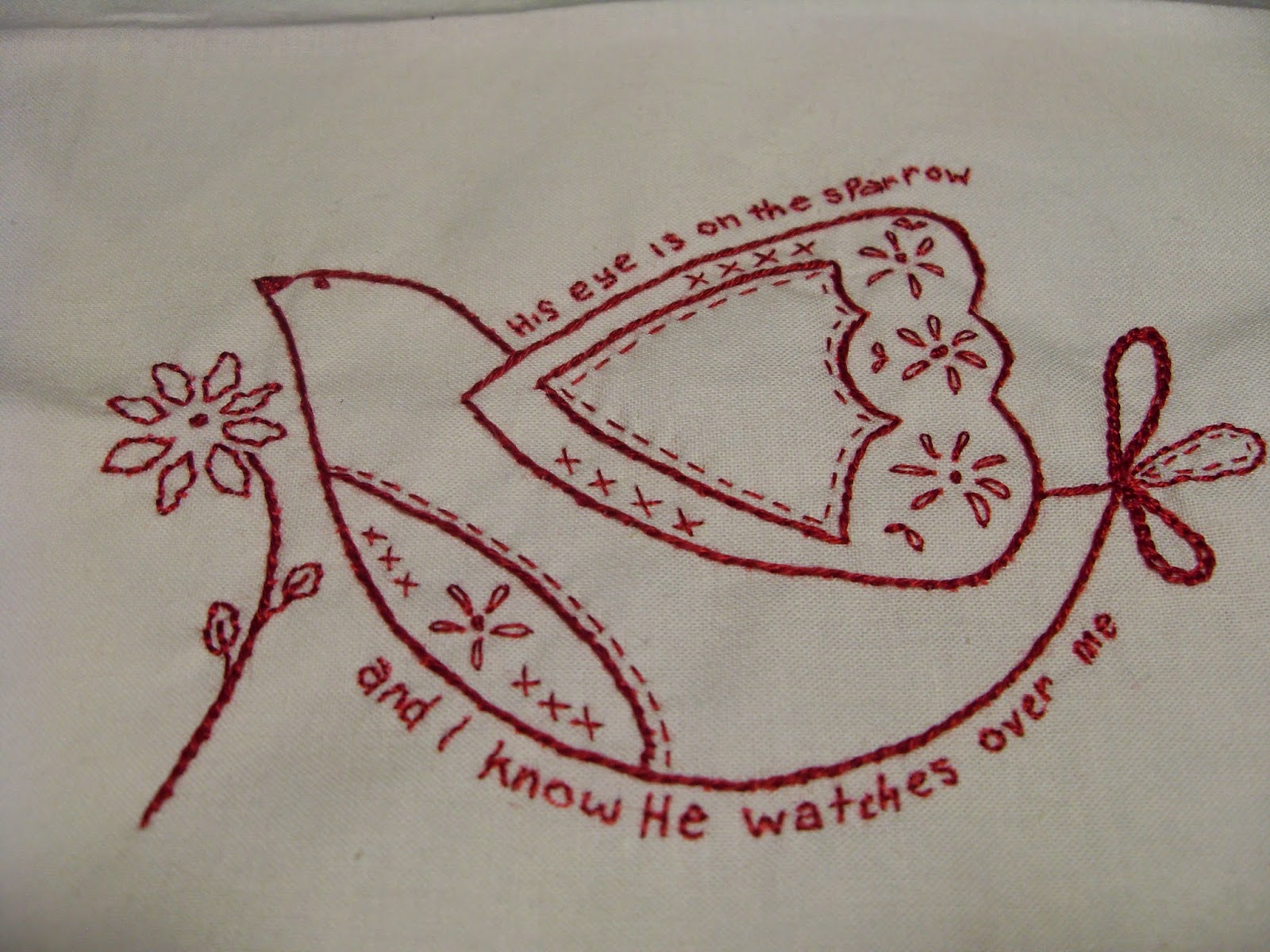 I finished both the sparrows to send to the States to help fundraising.  The lovely Jenny from Elefantz donated these designs for people to stitch and send to a worthy cause.  I really enjoyed stitching the designs and it gave me a lot of pleasure knowing that I might help even just a little bit. 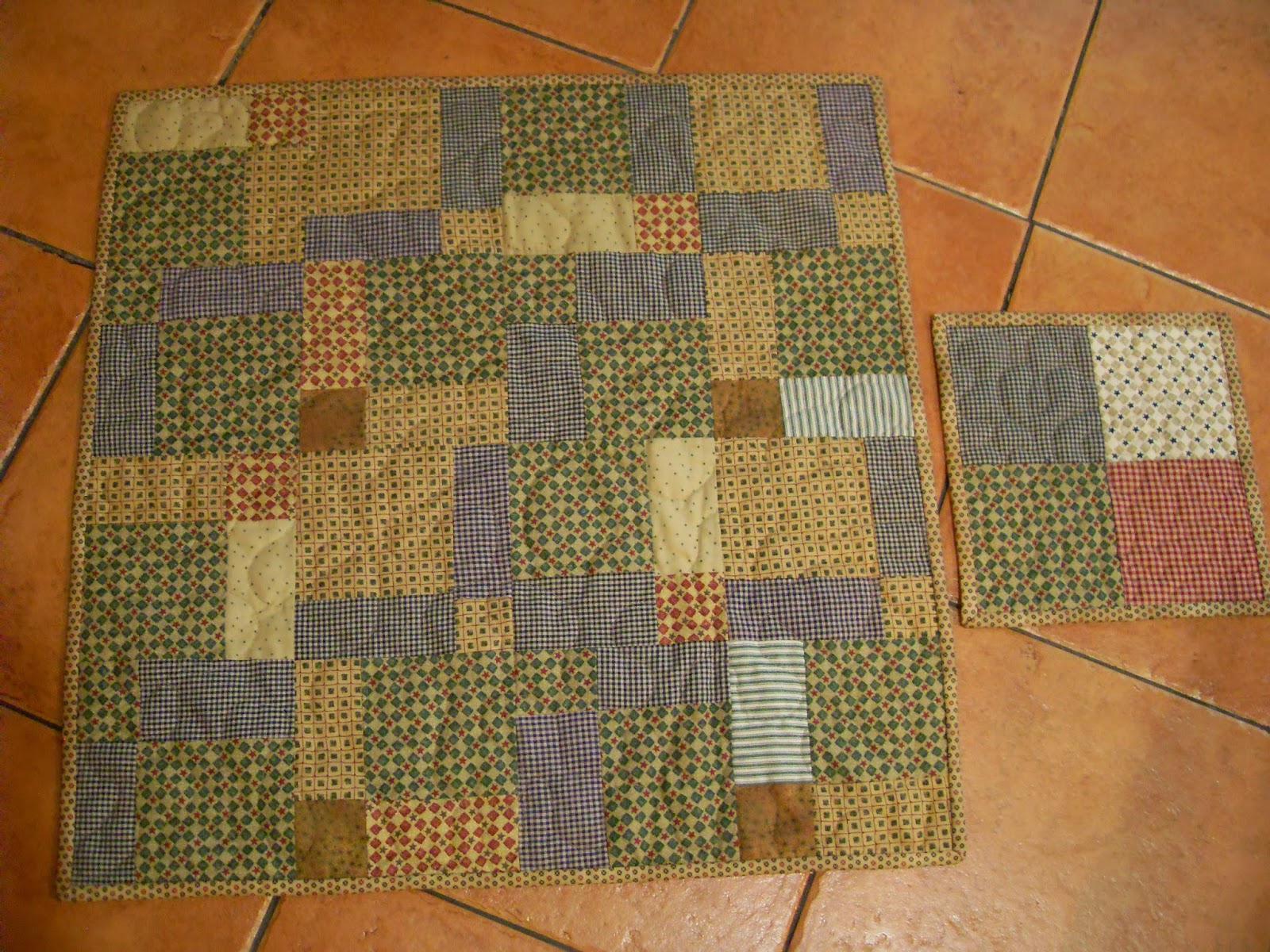 I finally finished a table topper and a mug rug for a friend of my mums.  I was supposed to finish it for Christmas but didn't quite get there... so made the mug rug as an extra.  I used pellon for the topper which made it nice and soft and light. 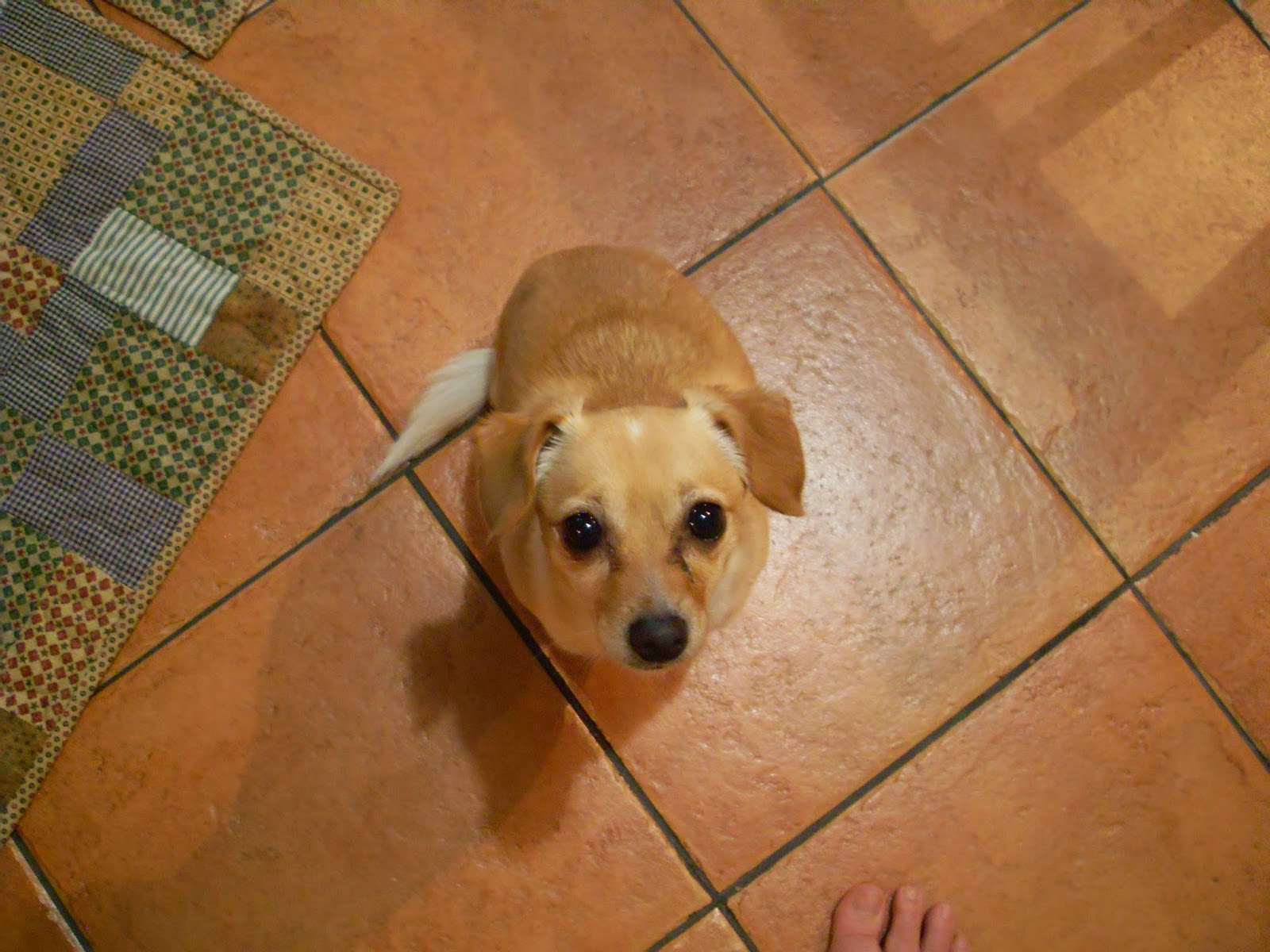 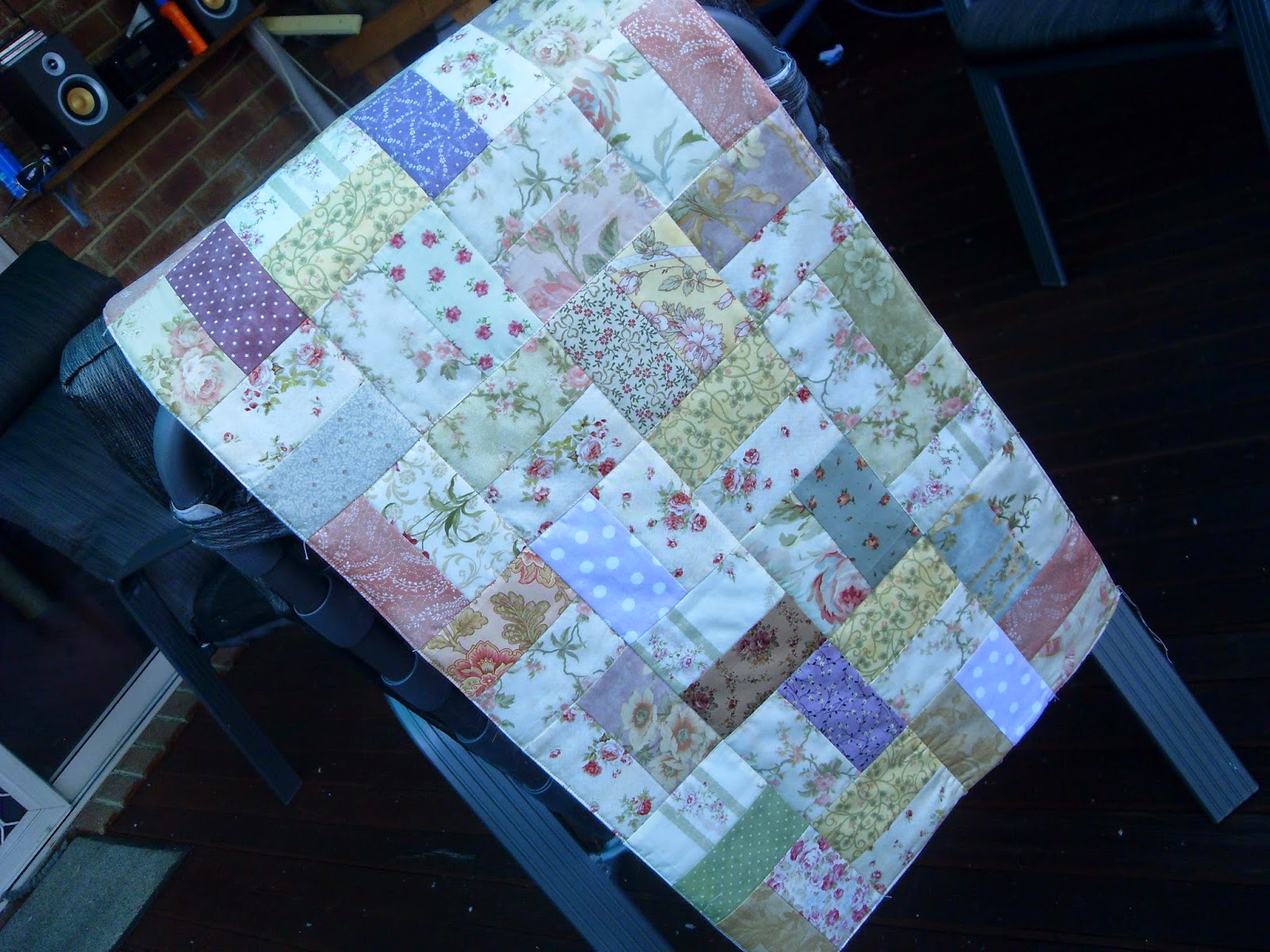 I also found out via face book that a co worker had a birthday so on Sunday I whipped up a table runner for her too.  I didn't bind this one, thought it might be quicker to turn it inside out and then sew along the edge.... it was, but I wasn't 100% happy with the finish... a little puckering occurred.....  will have to practice a bit more on the 'birthing' process!

Do you ever 'birth' a quilt?
Posted by Libster at 9:15 PM No comments: 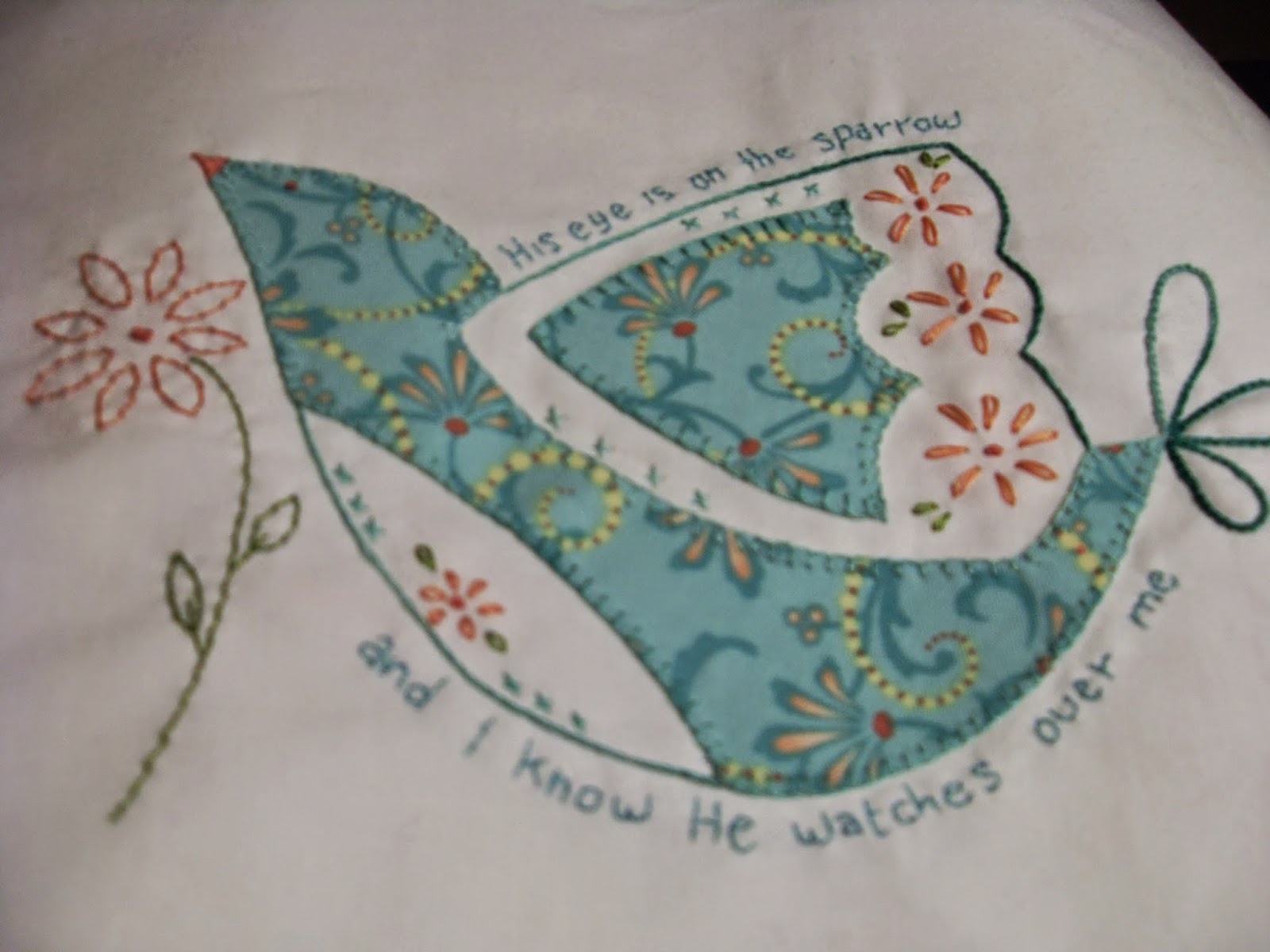 So I finished one of jenny's sparrows for the sparrow project!  I'm really happy with the way its turned out and it didn't take long to finish. 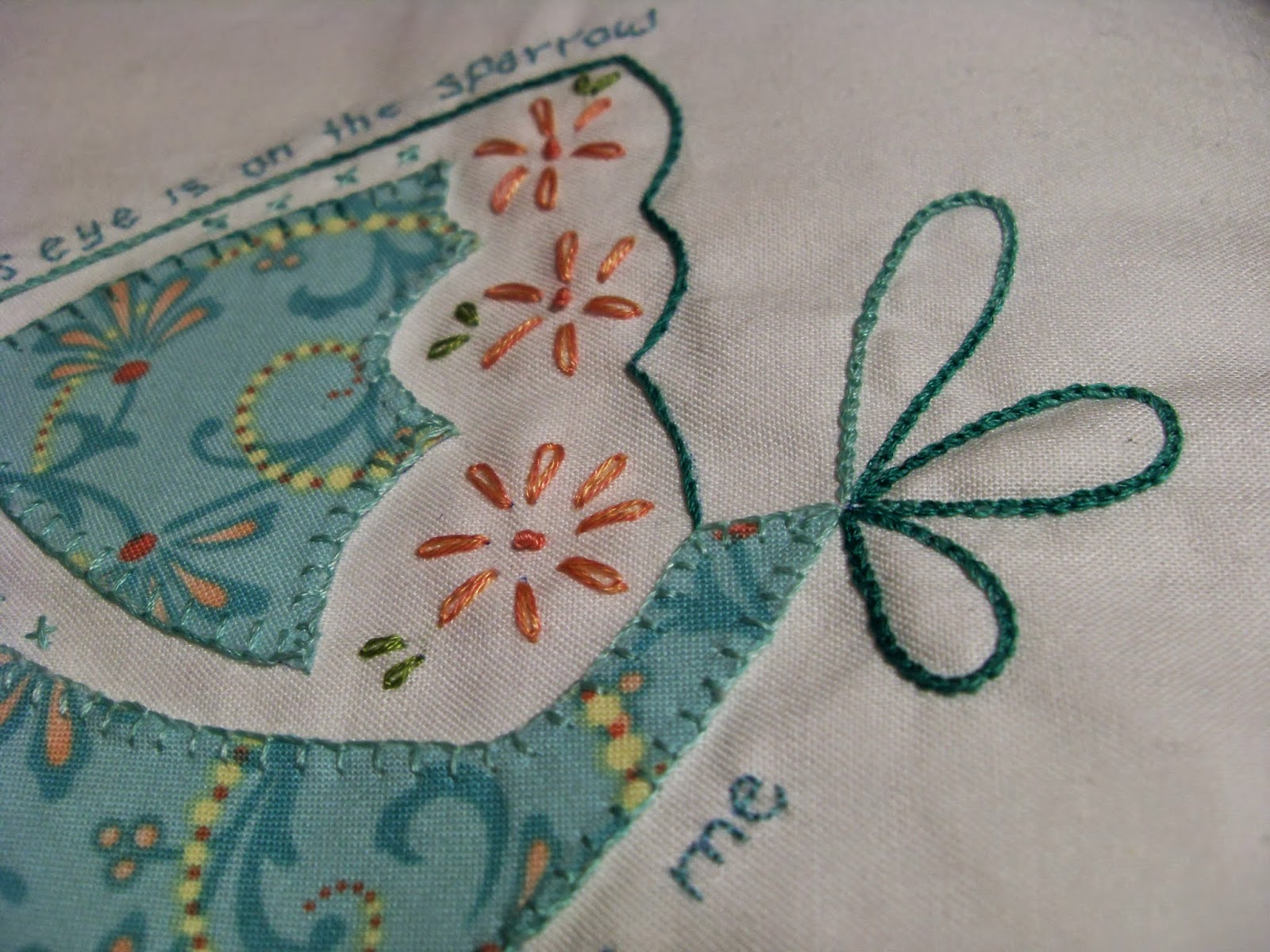 I used a variegated thread which gave the tail the 3 coloured look. 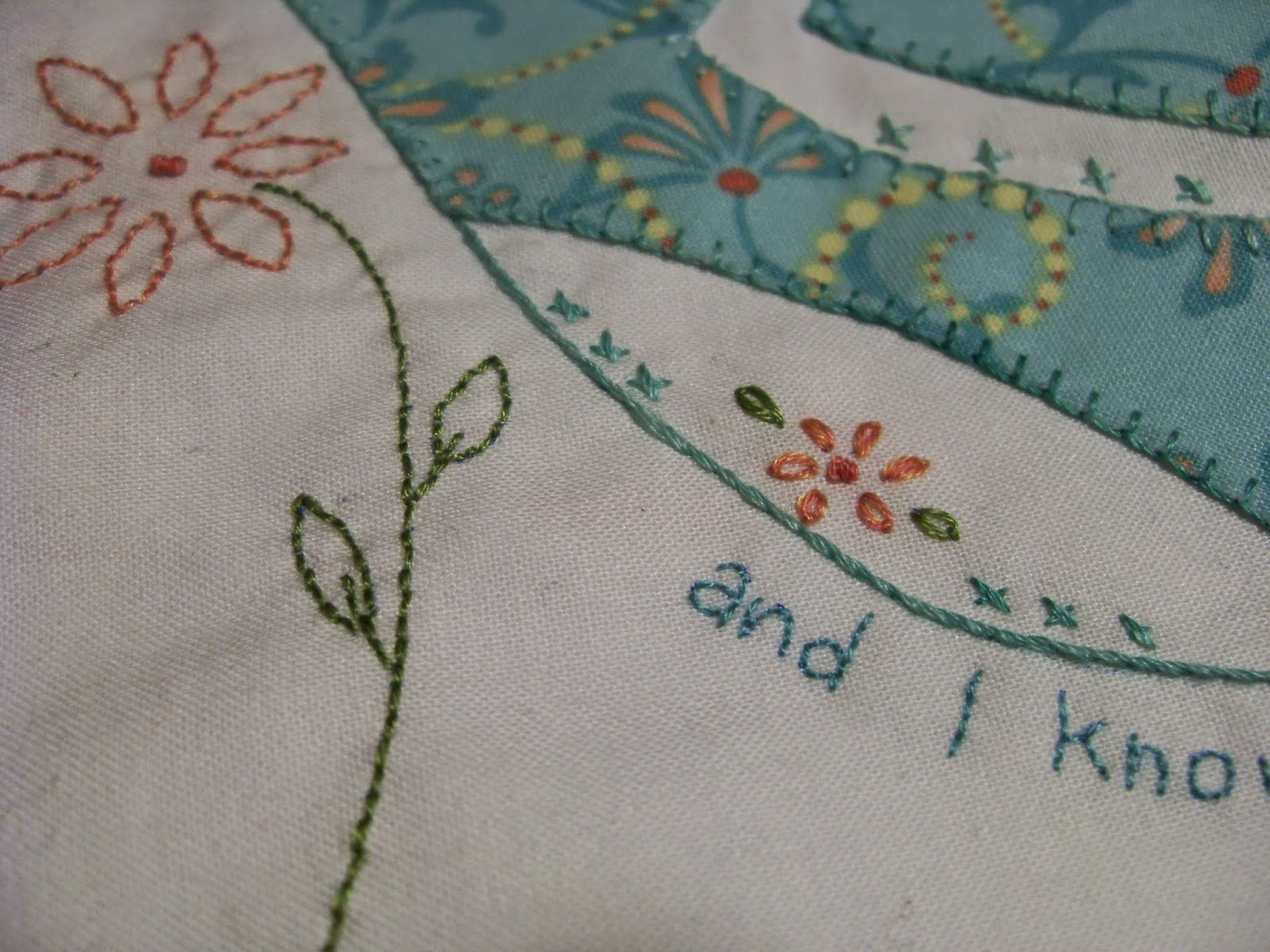 I wasn't sure what stitches Jenny used but I figured out what looked good and then just tried it out. 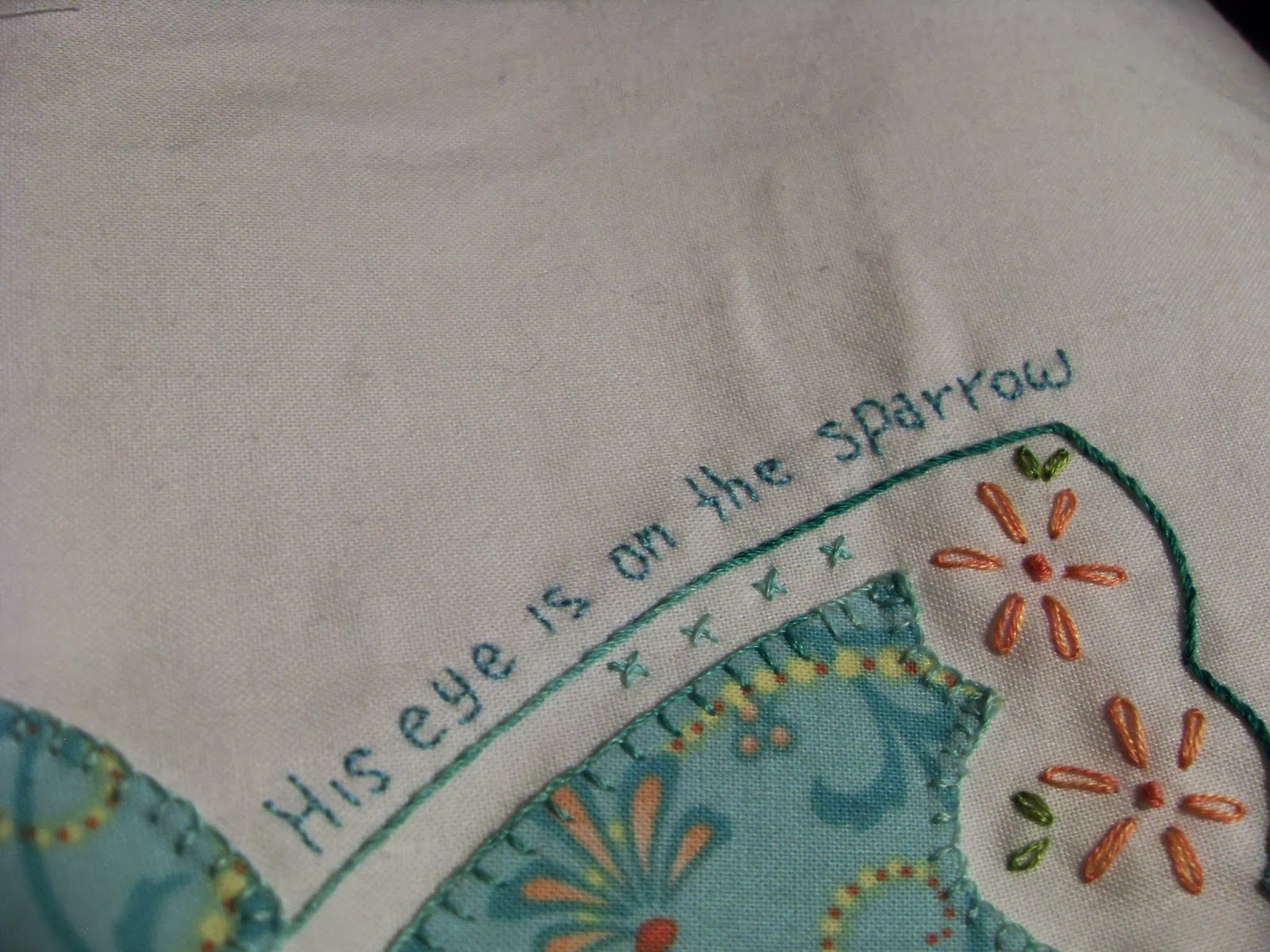 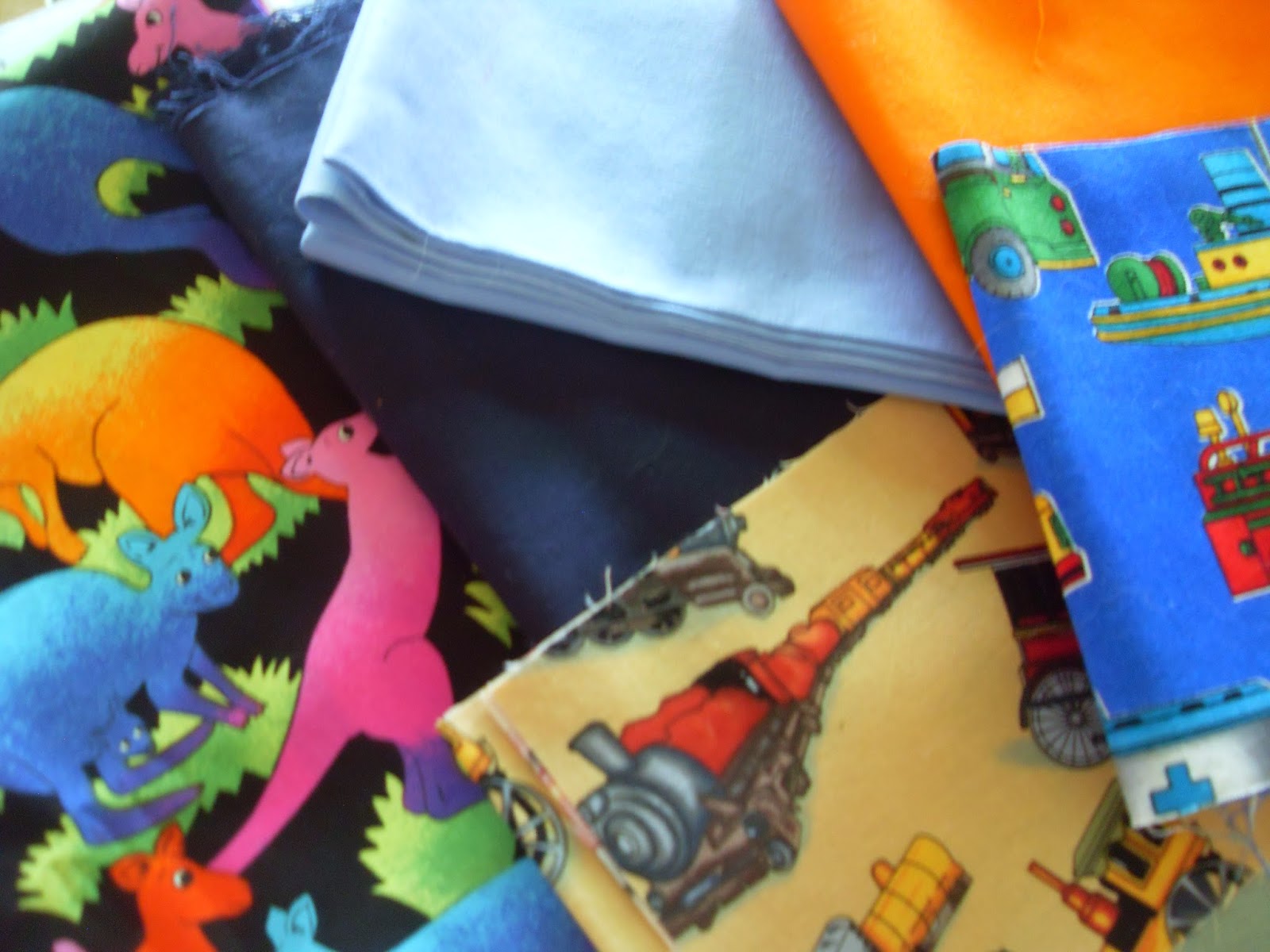 Aussie Hero Quilts brought out their next block of the month.  A nice simple 9 patch.  So I scrabbled through my stash and found some very suitable fabrics. 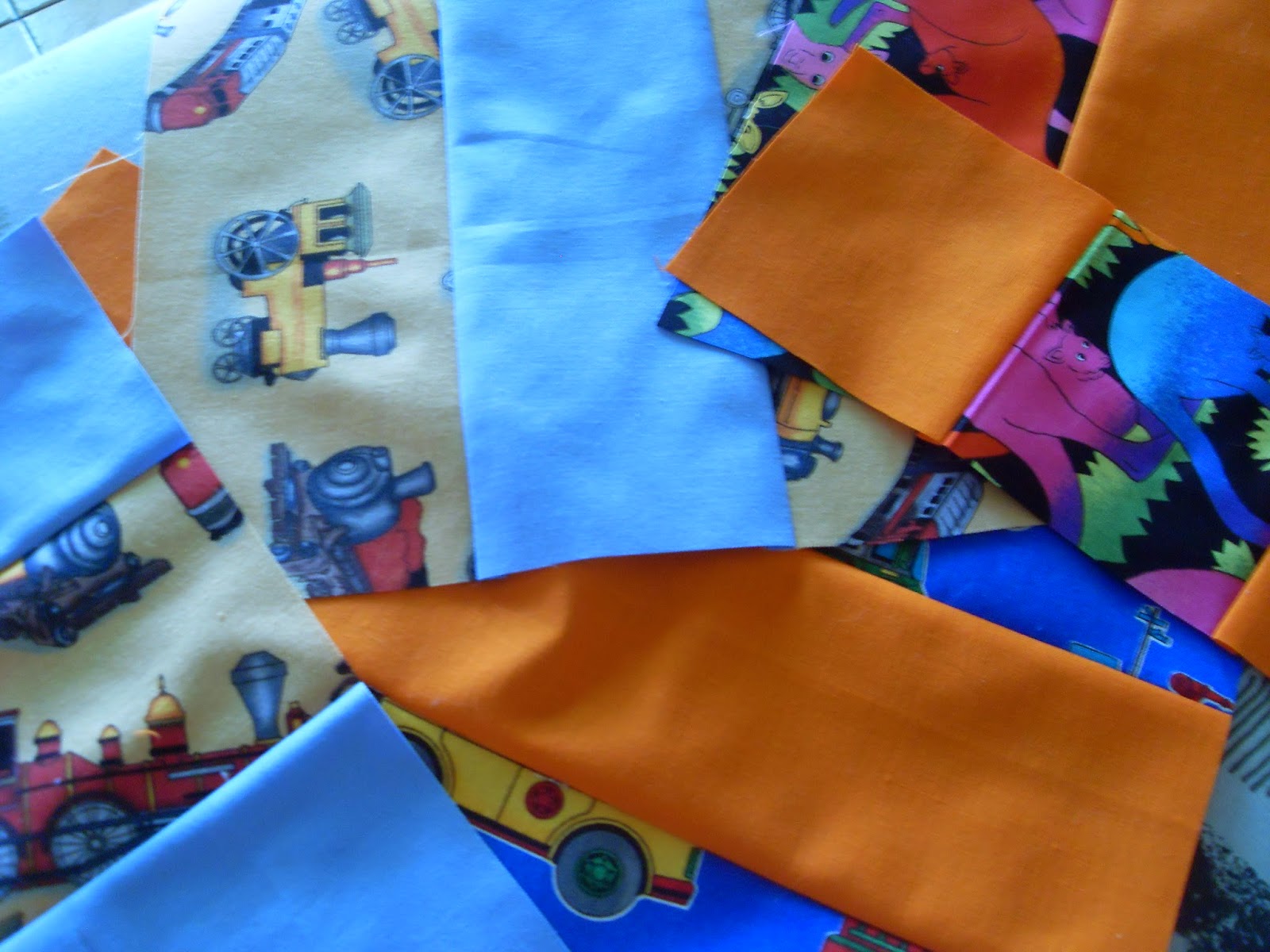 I whipped up 6 blocks in no time.... my mum was over and was amazed at how quickly they came together.  I didn't cut the blocks into separate 3.5" squares... I had them in strips and cross cut them, made it quicker to string piece and more accurate seams. 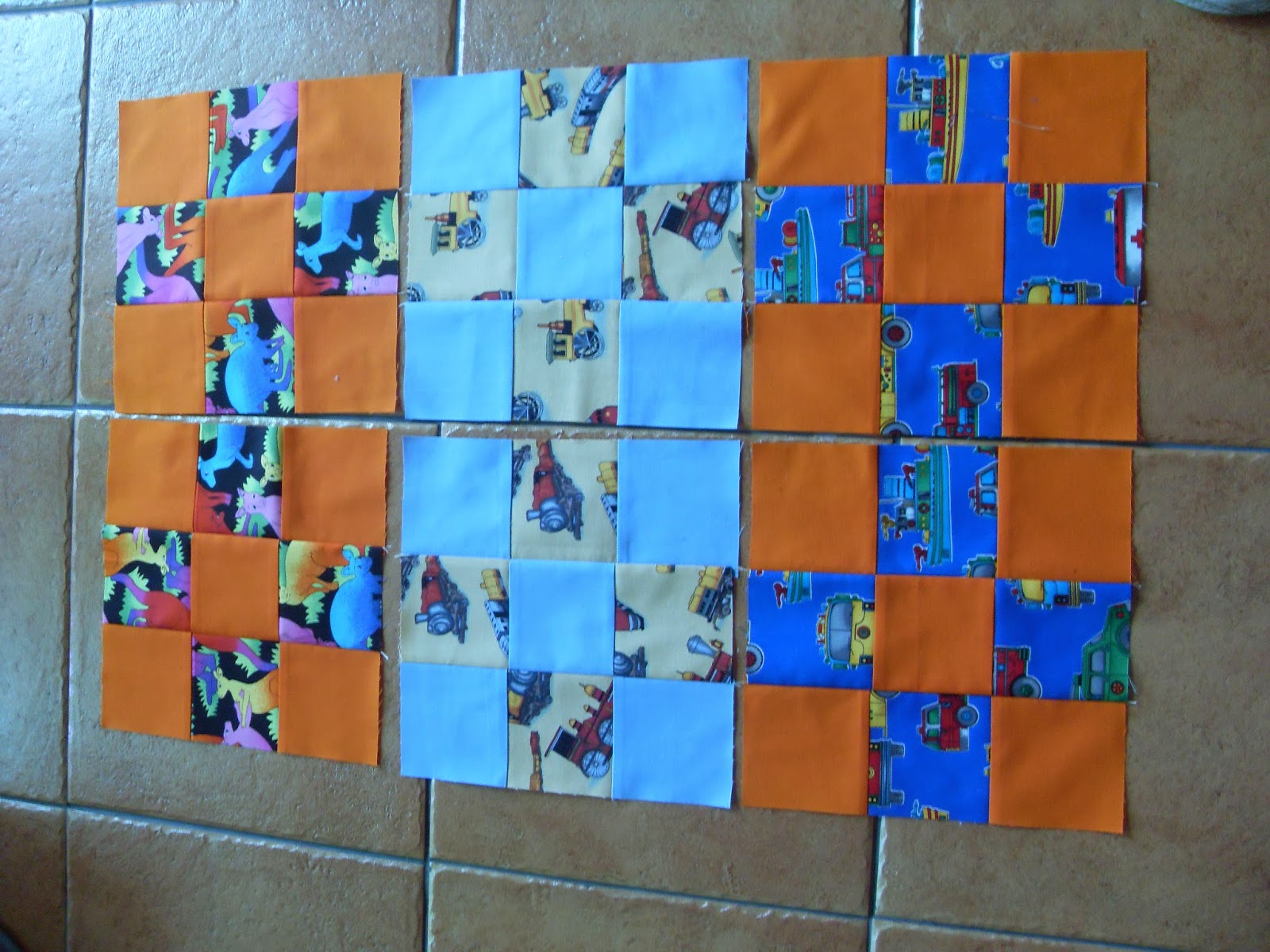 While cookie was snoozing I took this photo.... I saw a heap of these style pictures on face book and was in hysterics... the fisherman was highly amused when he saw me stalking the cat.  Once cookie woke up he attacked the strip of paper. 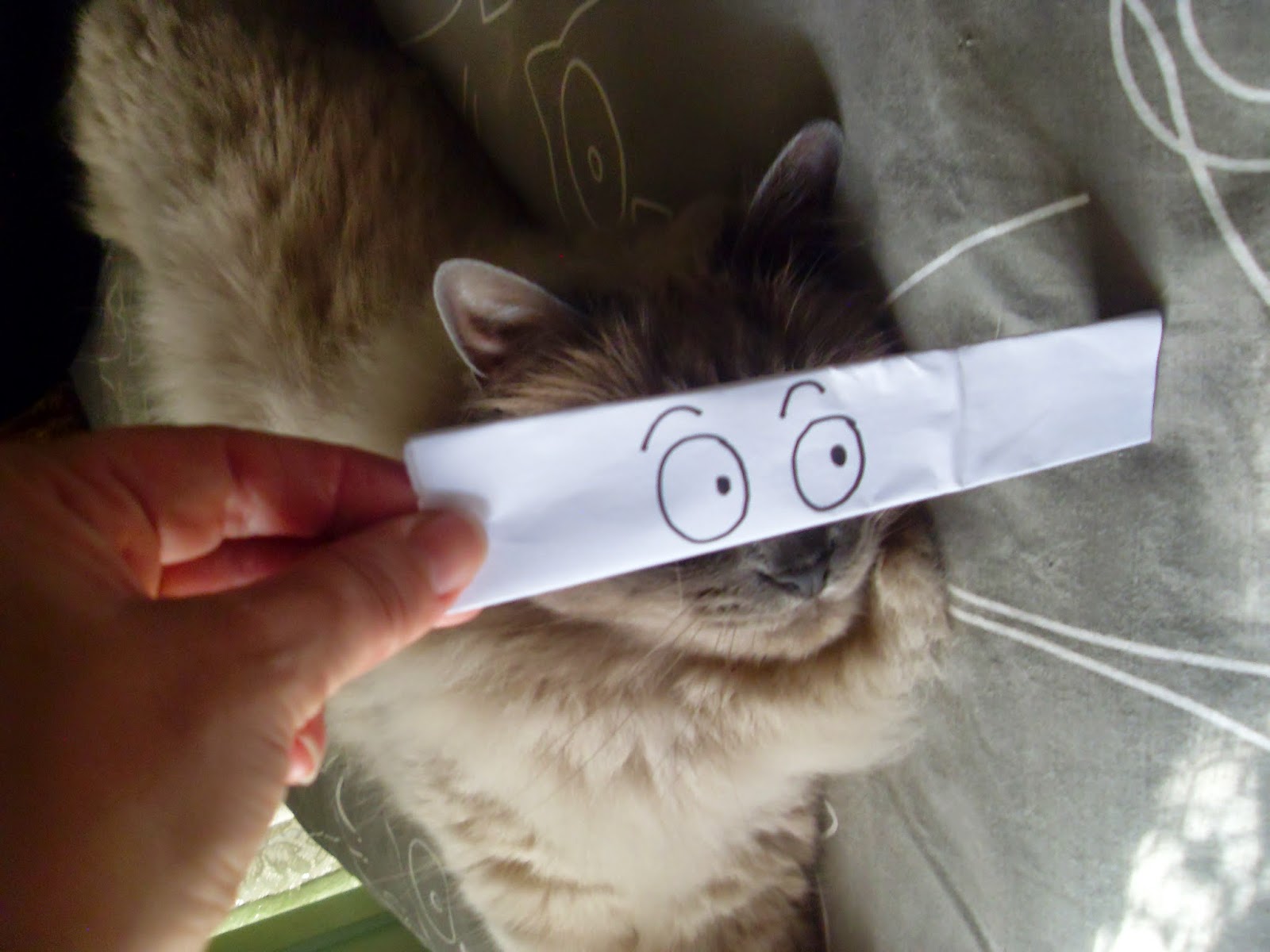 Posted by Libster at 6:10 PM No comments:

A special ride and some stitching! 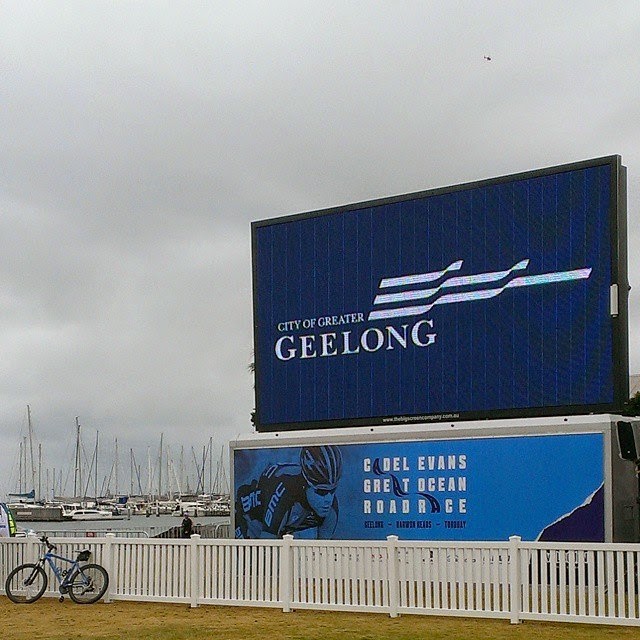 On Saturday I got to ride in Geelong for the first Cadel Evans great ocean road race... the peoples ride!.  I did the 110km option with my friends. Ended up being 114km 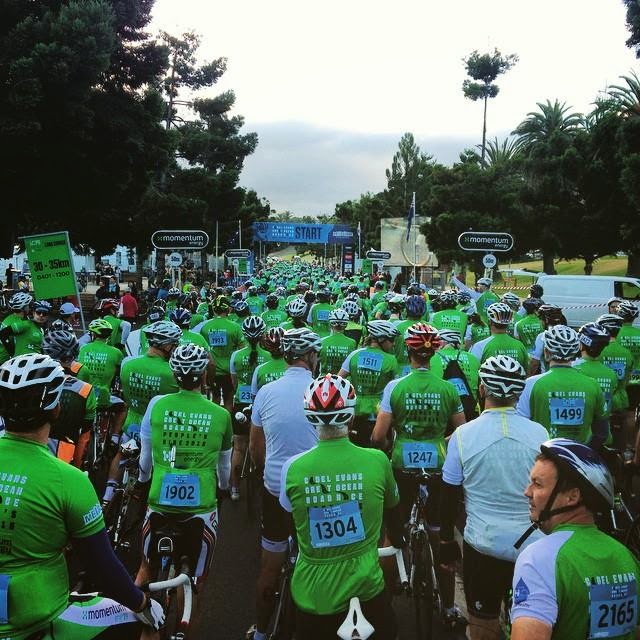 There was nearly 4000 cyclists eager to be part of this first ever event.  The ladies elite rode the same route as we did (several hours later!)  and on the Sunday the men did the same route but both of the elite rides did some extra kms.
My friends were faster than me and got back to Geelong first, but being slow has its merits!  I got to ride with Cadel himself!  yes, I kid you not.... there I was struggling along  riding like the wind and I turned to my right and nearly fell off my bike as there in his black and red BMC lycra was the man himself!
He smiled and waved and continued down the road, such an unexpected surprise... it might have been brief but we shared a moment on the road. 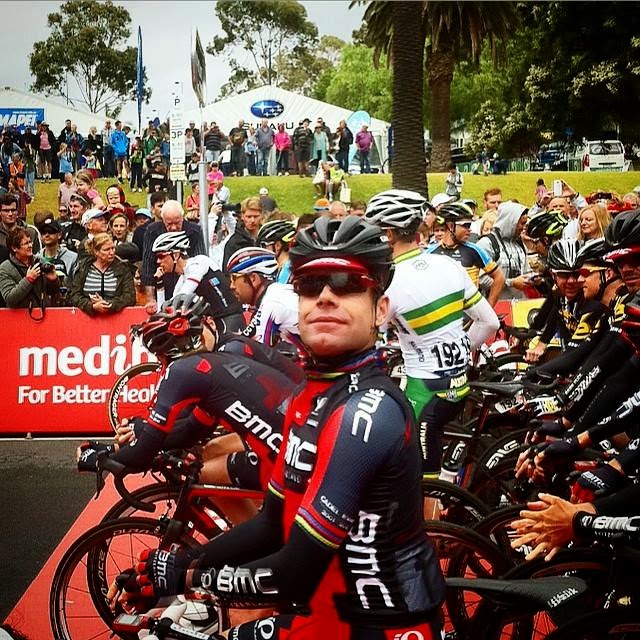 I sat down on Sunday to watch Cadel and all the other cyclists ride the same roads... I must say it was very exciting watching them ride, knowing how hard it was.  The winds blew us to pieces on Saturday, I had thought the first 50km would be fairly easy being mostly flat HA!  then after Moriac the hills.... Oh my lordy.  There was one hill in particular that many of us had to walk up and even then it was a killer! 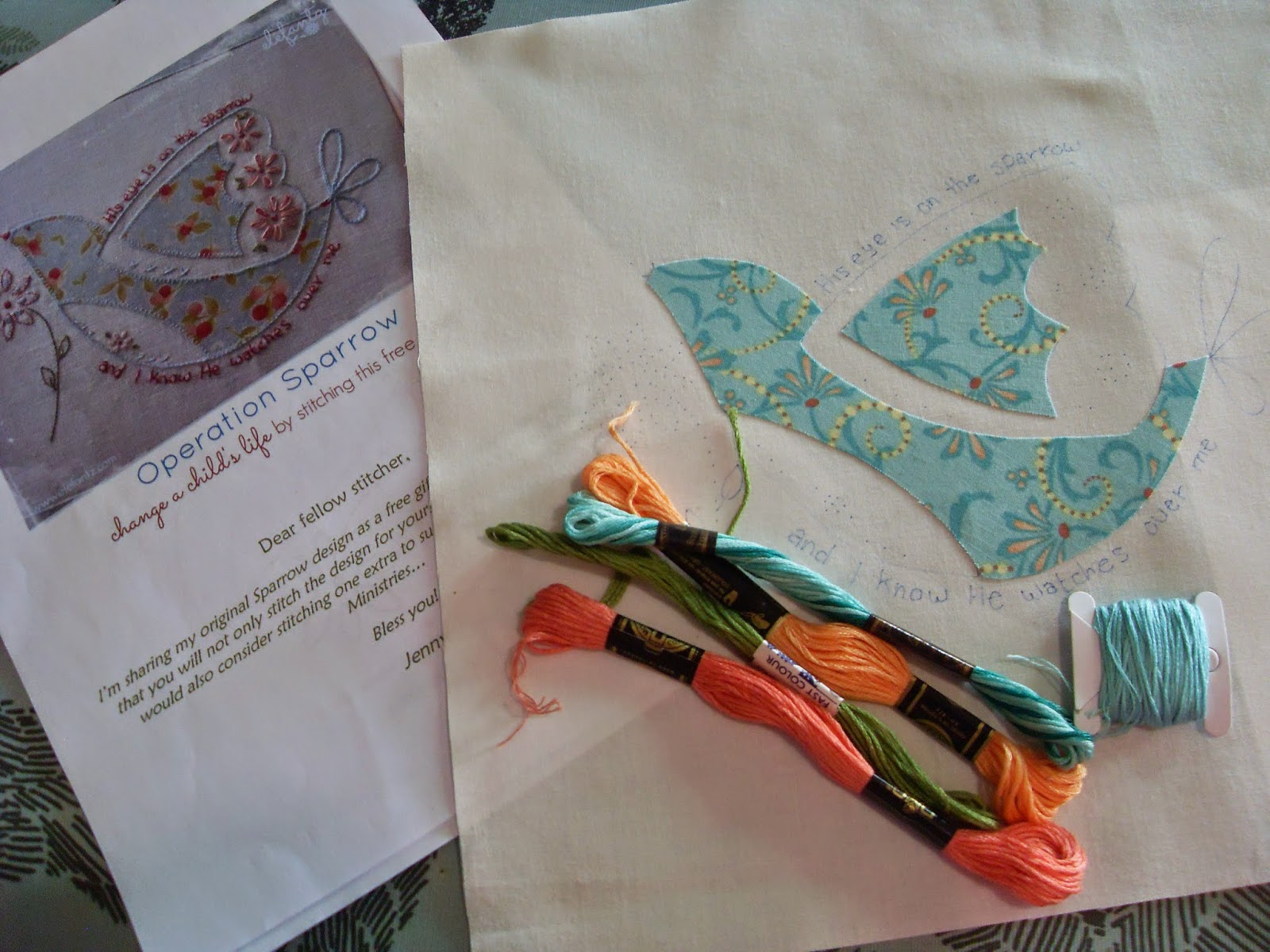 While I watched the men riding at super sonic speeds I stitched my sparrows. 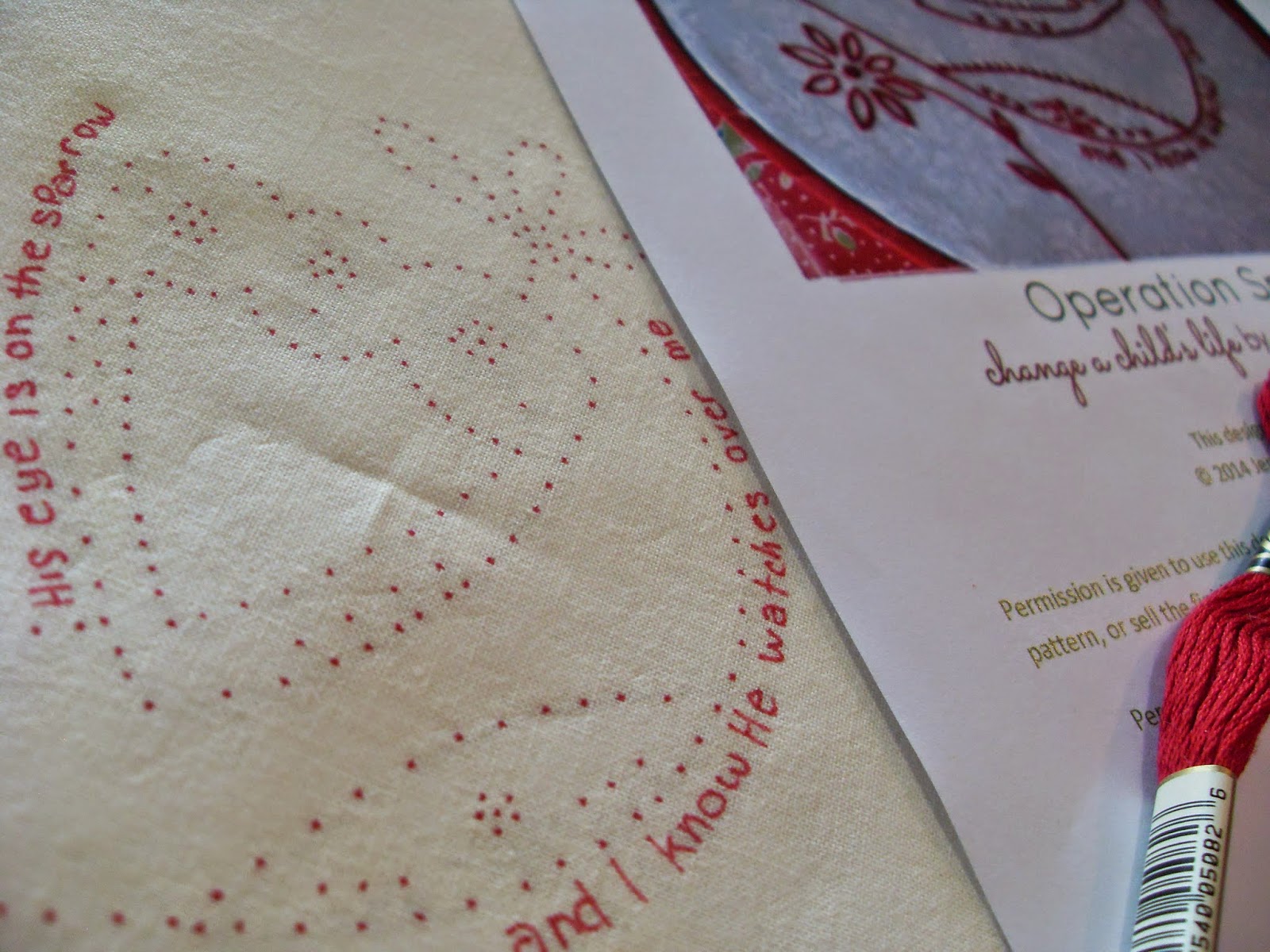 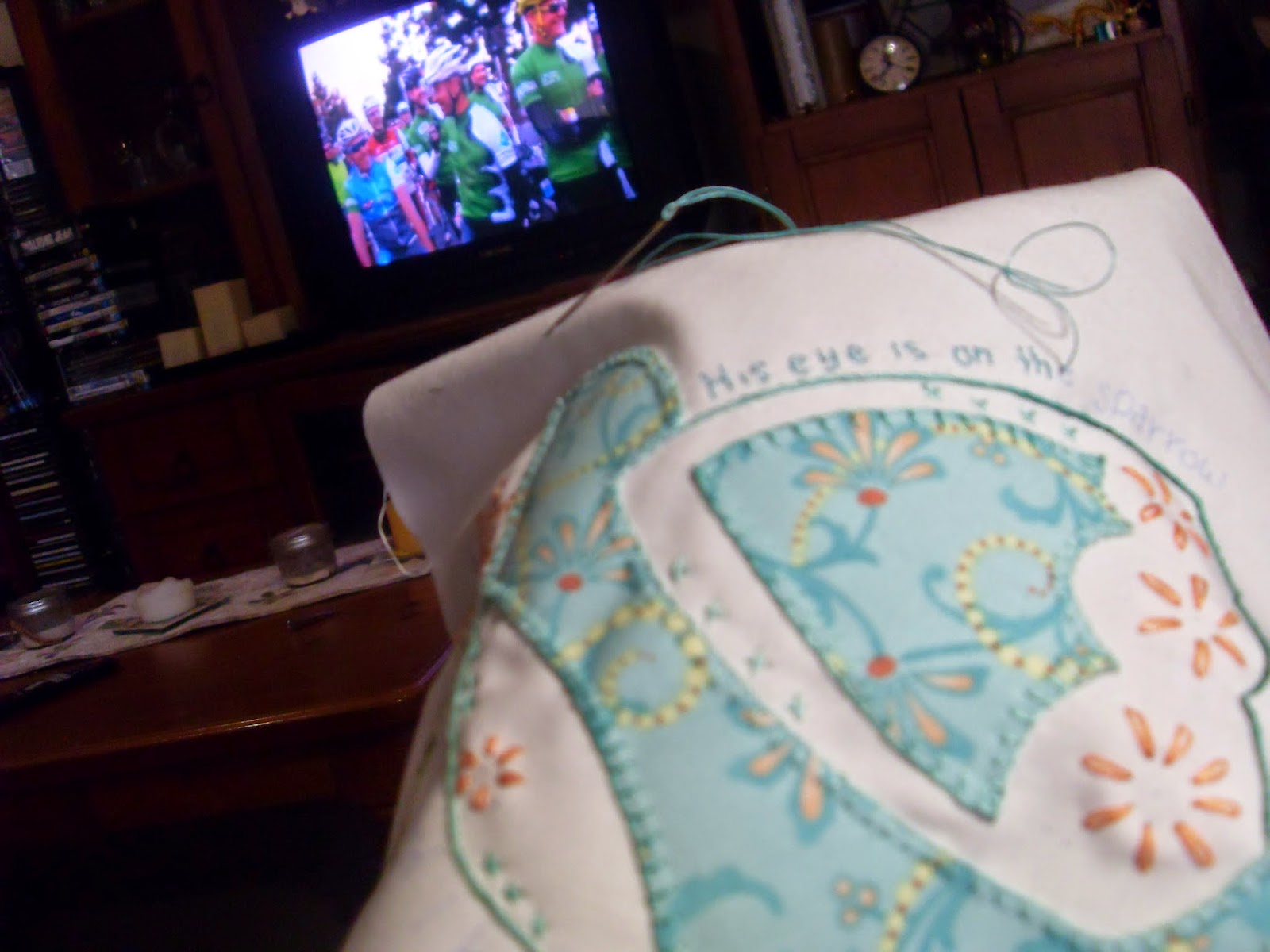 This last photo shows the peoples ride starting.... I was there.... somewhere LOL 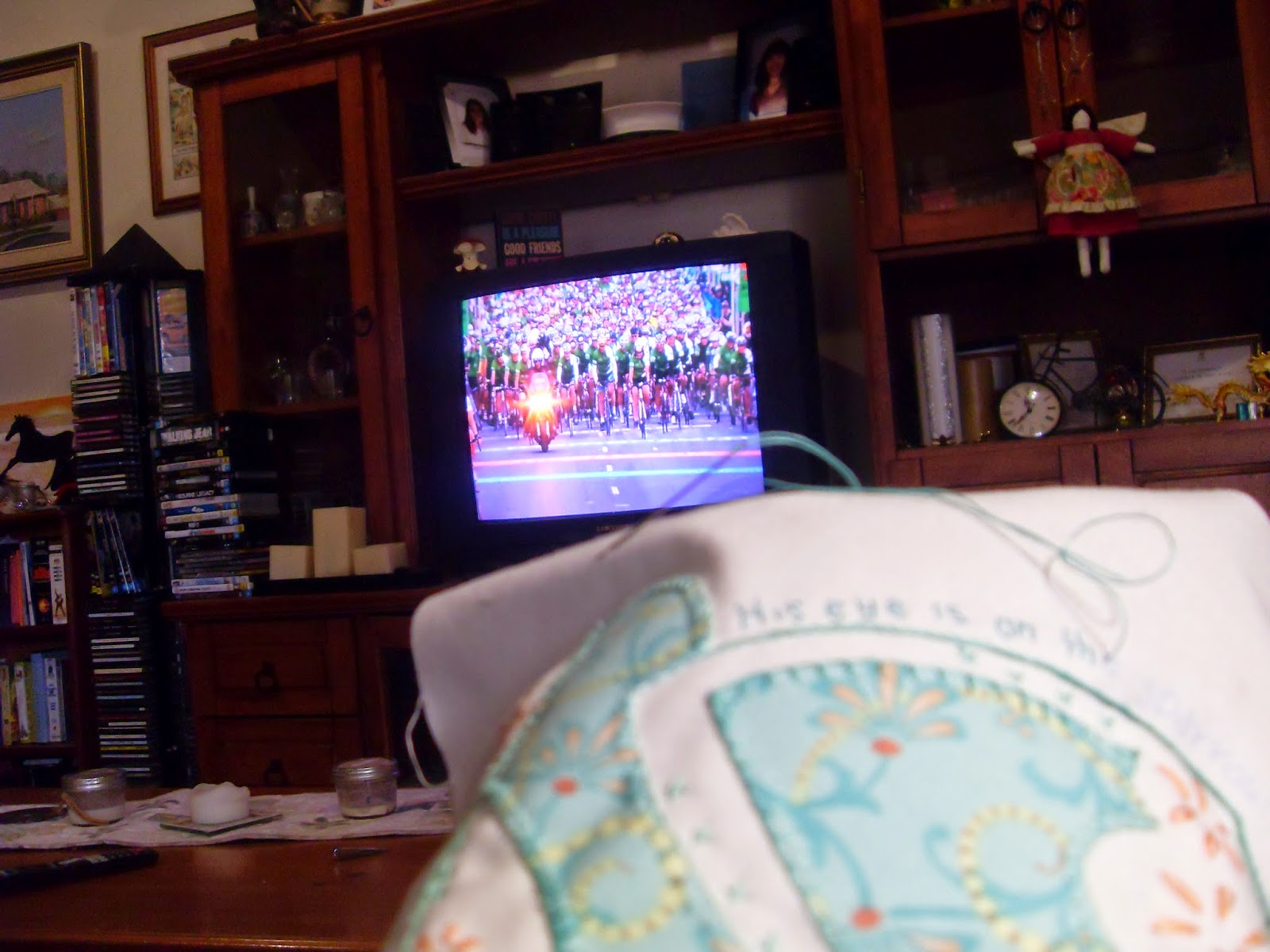 Posted by Libster at 7:46 PM No comments: