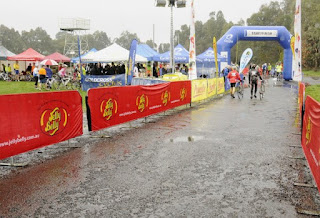 Yesterday was the whittlesea challenge.  The start was challenging, it was pouring with rain from the moment I got there to pick up my number.... It was dark and gloomy and many people were sitting in their cars considering their options to ride or go and get breakfast in a warm cafe. There was a few cars turning around for the soft option. 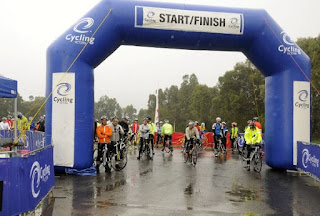 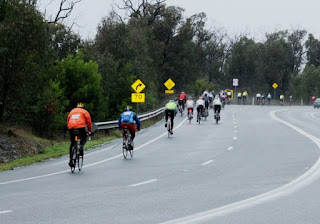 But my friends and I decided it wasn't an option to not take the challenge head on and give it a crack.  I was delighted to find my bestie at the start line to wish me luck and wave me off.
We rode from Whittlesea up to Flowerdale in the rain, up the hills.......

Then at flowerdale the rain stopped! By then I was sodden and had a squelchy butt, but so was all the other lunatics cyclists who had decided to ride. 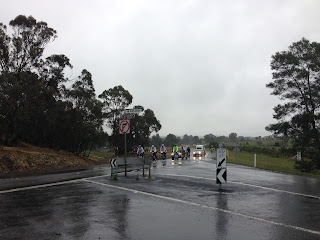 After Flowerdale we headed up to Strath Creek.  There is a long climb and all of a sudden... WHAM!
you hit the really nasty bit.  There is a short climb with a hairpin bend that you have to do a standing climb or you will fall off (some did).  Then as you ride further up you can look down to your left and see the road you just climbed up below you... as pictured below! 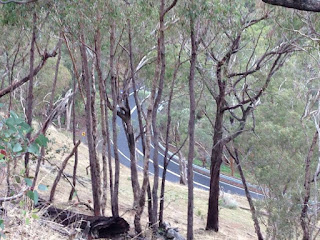 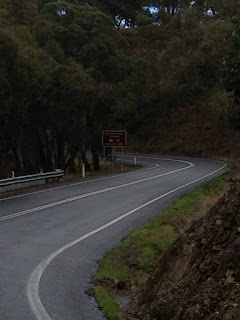 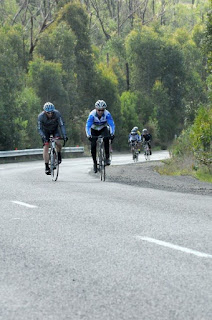 Here is one of the girls nearly at the top of the climb... I'm a few riders behind her.. looking like an ant poo. 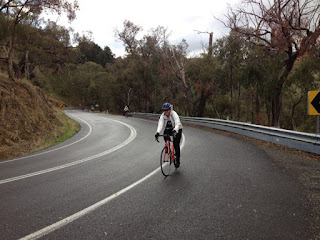 Once we conquered that hill I relaxed and enjoyed the rest of the ride to Broadford.  The sun came out for a short time and we all dried out but it was still a cold gloomy day. There was some awesome descents and I managed to get a top speed of 54km on one of them but my timing chip decided to slip down and went flying off into the bush, I had to stop to fetch it as the organisers would charge me for loosing it! 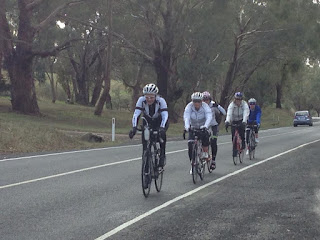 After Broadford we hit a horrid headwind which kept us company all the way back to Whittlesea, it wasn't nice and not at all welcome.  The girls formed a pelaton of 5 and we kept each other smiling or groaning by singing songs and mimicking the local wildlife (large dogs). 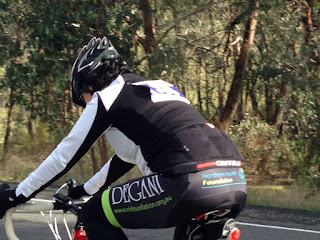 I kept my head down and powered my way up the hills.  Just when we thought we had finished with the climbing it just seemed to go on and on. 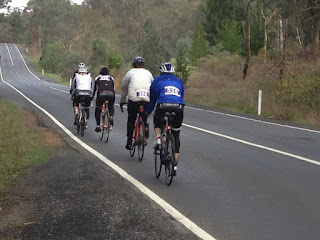 One of the girls had to jump in to our own personal sag wagon as she had hit the wall, but considering she was only going to do the short course of 68km with only one hill I think she did a damn fine job.

the final 10kms were really hard, I thought at one point my nether regions were on fire but the saddle I have been testing survived a very rigorous testing and I will be purchasing one this week.  I had left the girls behind me and was riding with one of the boys who kept pace with me up Strath creek so I was happy to have some company for the final kms.

So at the end of the day I rode 108km (they always rip me off a few kms!) in 5 hours.  Today I woke up with some sore muscles in the glutes and hammies but did 40mins on the treadmill and some long stretches and tonight I'm feeling much better.

I couldn't have done it alone and without the support of my friends and family (who think I'm insane lol) Will I do it again?  Most likely!
Posted by Libster at 8:18 PM 2 comments: