binding quilts and a road trip 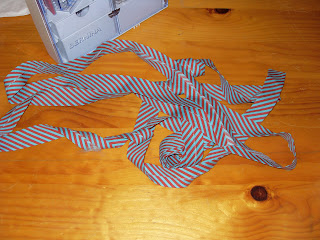 I was asked a while ago about 12 months ago to make another quilt for my cousins next baby.  Once I found out it was a boy I set out to find the pattern and material.  I made the top and then had my wonderful friend Anita quilt it for me.  All I had to do was but on the binding. 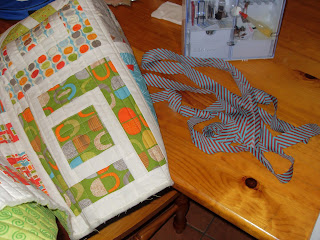 I decided to try out some pre made binding so it was all done for me.  I procrastinated for a few more weeks then last weekend I decided to finally sew it onto the quilt..... 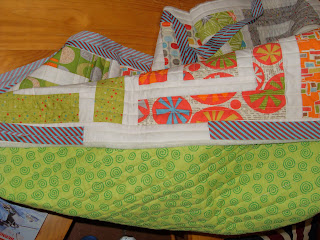 Disaster struck... I was 10" too short.... and it was 4pm on Sunday night and I had to work the next 3 days so the froglet drove me to the shop (thank goodness they had plenty left).  I decided to buy the entire length as I didn't want to be messing round with attaching it to the bias binding... how good was this, the shop rather than having to buy the entire length plus the extra, cut the new length and only charged me for the 1/2 metre extra.  They took back the shorter length!  I never expected that so it saved me many dollars!
I have now sewn it on and am ready to stitch down the back while watching the tour de France tonight! 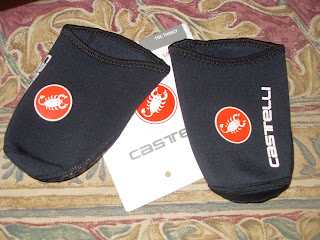 Of course no post of mine is complete without something about my bike, these are toe thingys.  I kid you not!  They slip over your shoes and help keep your toes warmer in these cold winter months.  they have a hole under neath that allow me to clip in to my pedals.  I received these for mothers day from the girls and they have been used well in the past months. 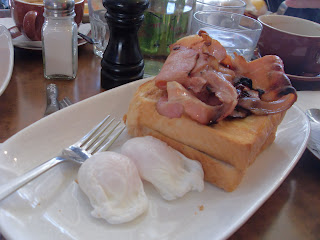 The fisherman and I took a little road trip (in the car, he doesn't ride!)  We went to our nations capital, Canberra.  Of course we had breakfast, the toast was enormous! 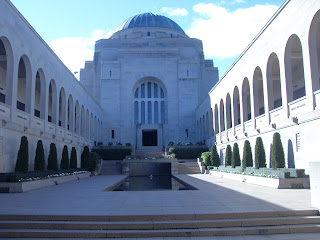 We visited the war memorial, I had been here as a child but the fisherman wished to pay his respects being an ex submariner. 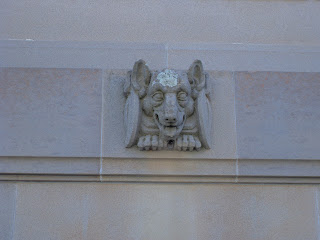 along the wall are these wonderful concrete gargoyles.. I find that with the digital cameras we all take many more photos of objects and in different ways to how we used to with film (who could afford them!!) 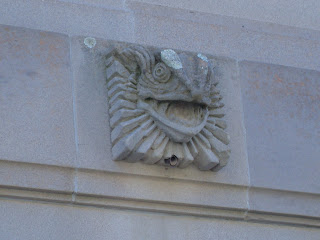 I should have asked the guide if they meant any thing or represented something. 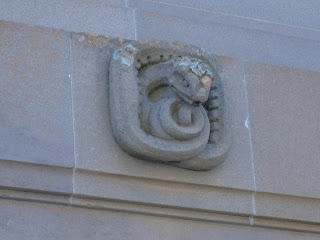 There are the lists of all of those who have fallen and hundreds of Poppy's are tucked in the cracks. 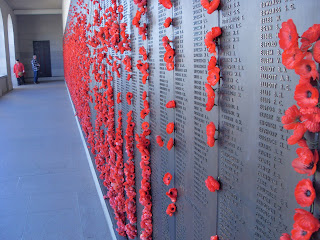 My fisherman had his sunglasses on when we went in side to the museum, he doesn't get very emotional but I doubt many people can visit places such as this and not be moved. 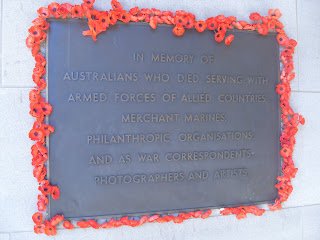 Opps the poor sailor is sideways.  This is one of several enormous murals created using little tiles, they are in a huge area with a high ceiling. 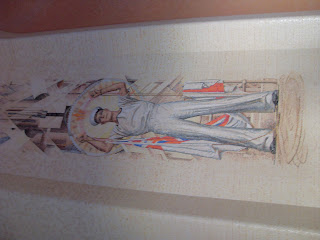 When we came home I organised to get new carpet in the girls rooms, so everything had to come out of both of their rooms.... Milly thought it was great being able to climb this stack of shit belongings. 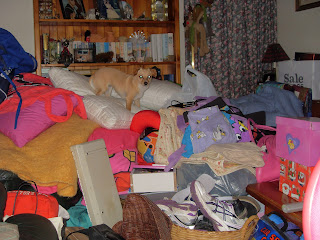 I had to sit surrounded by this and more on the other side overnight, I know what hoarders feel like now.  The 'stuff' is now sorted out, returned to their rooms or to where ever it needed to go.  Carpet is in, now in a few weeks time my bedroom needs to be cleared out, painted, a new wardrobe put in and then the carpet that same afternoon so that I can put everything back!

The fisherman detests painting and has been putting this off for months so I ended up just going and booking in the dates and telling him that its happening!
Posted by Libster at 4:53 PM 1 comment: